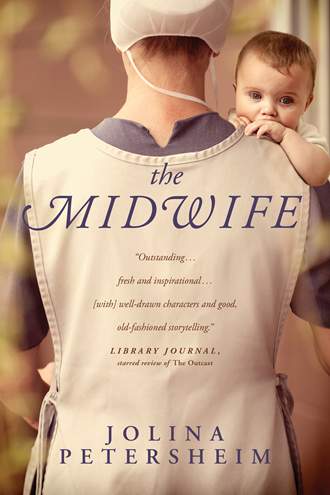 Jolina Petersheim Redeem For: 8999 Points
You need to be a logged in member to redeem products.

Since the day Rhoda Mummau was baptized into the Old Order Mennonite Church and became the head midwife of Hopen Haus, she’s been torn between the needs of the unwed mothers under her care and her desire to conceal the secrets of her past. Contact with the outside world could provide medical advantages, but remaining secluded in the community gives her the anonymity she craves.

Graduate student Beth Winslow is on a path she never would have chosen. Heartbroken after surrendering a baby to adoption, she devotes herself to her studies until she becomes pregnant again, this time as a surrogate. But when early tests indicate possible abnormalities, Beth is unprepared for the parents’ decision to end the pregnancy—and for the fierce love she feels for this unborn child. Desperate, she flees the city and seeks refuge at Hopen House.

Past and present collide when a young woman named Amelia arrives to the sweeping countryside bearing secrets of her own. As Amelia’s due date draws near, Rhoda must face her past and those she thought she had left behind in order for the healing power of love and forgiveness to set them all free.

I found The Midwife to be first confusing, then disappointing. I don't enjoy books written in 1st person, and this one had more than one character portrayed in that style. Secondly, there are a lot of flashbacks, and that makes it confusing. Also, it isn't realistic of the Old Order Mennonite culture I'm acquainted with.

Occasionally a book will come along that pulls you in from the very first line and has shaken you by the shoulders before you close the back cover on the last page. Jolina Petersheim has pulled together a story of hope and redemption that tells two stories at the same time. One story is about Beth in the 1990's and the other story is about Rhoda in the current times. Side stories include Amelia, Lyddie, Thom and Meredith, Looper, and Sarah. The trick (not so much a trick, but it is intriguing until the reveal is made) in the two main stories is that Beth and Rhoda are the same person--and there is so much to tell of their stories. Beth was hired by Thom and Meredith to be a surrogate for their child, a job she was happy to do until the possibility of genetic malformations occurred. Then Meredith especially wanted to terminate the pregnancy for a child she never wanted in the first place. Beth's first instinct is to run to Dry Hollow, Tennessee, to a home for unwed mothers run by Old Order Mennonites. She hides there and becomes the new midwife in the house. Fast forward eighteen years to when Amelia ends up at the Hopen Haus and all the pieces of the story fall into place and all the parts make a whole. FOR ME, the story seemed disjointed until all the loose ends are tied up, but once everything is revealed, it all makes sense. Jolina has taken the reader on a real roller coaster ride with loops and turns and climbs and dives, and with each element, The Midwife picks up speed and keeps the reader enthralled. Five Stars, Two Thumbs Up, and a midwife to deliver your babies.

“Kneeling there, that braided rug transmuting my knees with its pattern, I could see how God had already turned the hardships of my life for good,” Beth recalls in Jolina Petersheim’s novel, "The Midwife." At three hundred and fifteen pages, this paperback targets mature teenagers and young adults who enjoy love stories revolving around the simple life of the Mennonites. With no profanity or extreme violence, the topic of pregnancy out of wedlock may not be apropos for naÃ¯ve readers. At the end of the story, there is a note by the author, her biography, and an interview along with a dozen discussion questions. This reader wishes all pronouns of God were capitalized for reverence. Everyone has secrets and goes to great lengths trying to keep them hidden. Forty-two year old Rhoda Mummau has kept her skeletons in her closet of the past for over two decades, sheltering herself from allowing anyone in her heart. Tucked away in a small Mennonite community in Tennessee, she excels as the head midwife of the Hopen Haus, a haven for unwed mothers where there is no electricity, old-fashion living, and anonymity. In her comfort zone, she is baptized into the restricted religion. Covering almost twenty years, two women face issues that alter and change life’s choices. After being pregnant once before, Beth, a graduate student working on her thesis, agrees to become a surrogate to help pay for her college tuition. When she learns the child she is carrying may have defects, she yearns to protect the baby inside her. Feeling abandoned by her mother who left when she was twelve years old, the student flees the state, ending at Hopen Haus to have her baby. Facing an unplanned pregnancy, seventeen year old Amelia arrives at the care home in her BMW, trying to make a decision she can live with without her parents’ influence. Unsure of the Plain ways, she tries to figure out the other young girls’ circumstances in how they arrived in the same predicament. Will Rhoda stop covering her past sins and erase the strong hold on her heart as she helps those in need? Will two women’s paths intersect at the perfect moment when they allow God’s intervention? As a second novel by the writer, Petersheim weaves sympathetic, caring characters that value life and love as they rely on God for grace and forgiveness. This book was furnished by Tyndale House Publishers, Inc. in exchange for a review based on the reader’s honest opinion.