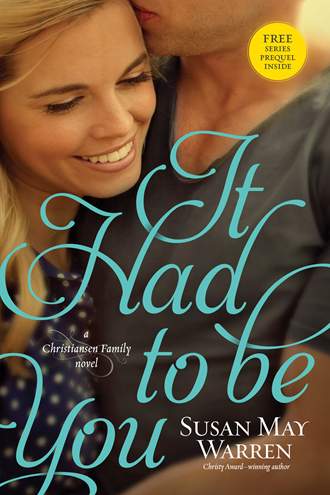 It Had to Be You

Susan May Warren Redeem For: 50 Points
You need to be a logged in member to redeem products.

Eden Christiansen never imagined her role as her younger brother Owen’s cheerleader would keep her on the sidelines of her own life. Sure, it feels good to be needed, but looking after the reckless NHL rookie leaves little time for Eden to focus on her own career. She dreamed of making a name for herself as a reporter, but is stuck writing obits—and starting to fear she doesn’t have the chops to land a major story. If only someone would step up to mentor Owen . . . but she knows better than to expect help from team veteran and bad-boy enforcer Jace Jacobsen.

Jace has built his career on the infamous reputation of his aggressive behavior—on and off the ice. Now at a crossroads about his future in hockey, that reputation has him trapped. And the guilt-trip he’s getting from Eden Christiansen isn’t making things any easier. But when Owen’s carelessness leads to a career-threatening injury and Eden stumbles upon a story that could be her big break, she and Jace are thrown together . . . and begin to wonder if they belong on the same team after all.

It Had to Be You A Christiansen Family Novel #2 By Susan May Warren It Had to Be You is the second book in the Christiansen Family novels this book follows Eden Christiansen. Eden has always felt like she's the Christiansen who is in the shadows. Someone whose job it is to help others fulfill their dreams. Eden wants to celebrate life with her writing, but she is stuck writing obituaries. Eden is trying help her younger brother Owen to keep his life on track. But Owen wants to live life his way and no one is going stifle him even a bossy older sister. When Owen gets himself into yet another almost mess, Eden confronts team captain Jace Jacobsen about his lack of leadership. Little did she know that by confronting the infamous J-Hammer Jacobsen she was about to change her life. Eden is about to be shown her true worth and the value her life is to those she hasn't ever met. When Owen faces a potentially career ending injury Eden discovers that first impressions aren't always right and there is more to Jace than just the media bad-boy image that has been presented. But both of them are dealing with insecurities that keep them from thinking that the other could ever see them as they truly are. A potential big-break story may just pull them together or it could drive them apart. I really love the way Susan May Warren's writing draws you in to the story. You feel for these characters - when they hurt so do you, the joy they feel is yours. All the song references through-out the book made me pull out my Michael Buble and my James Darren This One's From the Heart cd's. I love all the songs that were referenced and had to have them playing! As an added bonus there is a series prequel at the end of the book - I Really Do Miss Your Smile. This sweet novella takes place over 11 years and it is John and Ingrid's story - a story almost wasn't. But one that was meant to be. It Had to Be You is a lovely book that will touch your heart. I was provided a copy of this book by the Tyndale Blogging Network in exchange for my honest review, all opinions expressed are my own and no expectations were placed upon this review.

“Well, look at me. I’m the cheerleader. I’m the one who sits in the stands and waves the foam finger. I’m just the bystander. In their lives. In my life,” Eden explains in Susan May Warren’s love story, "It Had to Be You." This three hundred and seventy-eight page softbound book is part of the Christiansen Family series, targeted toward readers who love sweet romance with relational conflicts, confrontation, and forgiveness. With no profanity, overtly sexual scenes, or extreme violence, the story centers around accepting what God graciously gives in life. After the narrative, an author biography and eighteen group discussion questions are included. In this romantic tome, single Eden Christiansen has always been the one in her family that emotionally supports everyone. In her role as protector, housekeeper, mentor, and fan of her professional hockey player brother, Owen, she has spent her entire life taking care of others. Although she has been working for a local Minneapolis newspaper the last four years writing obituaries, she feels she will never become the writer or reporter she yearns to be because she constantly puts others before herself. Caught up with the buzz and adrenaline rush of being in the spotlight as the upcoming NHL rookie, Owen makes poor choices again and again while Eden covers, protects, and enables him. As he idolizes the popular playboy team captain, Jace Jacobsen, she cringes at the veteran player’s aggressive, abrasive style on and off the ice, hoping her brother is not swayed to mimic him. When Owen gets an injury that threatens his career, Eden and Jace must keep their emotions in check to try to help the hurt and angry player. As the two are thrown together, they become notably aware of their many societal differences; but they slowly help each other understand how God graciously forgives, forgets, and allows hope, promise, and change. As Jace and Owen are challenged by the violence their bodies endure at each hockey game played, Eden questions her ability to write life into her obituary notices, trying to find her real place in the grandstands of life. Once again, Warren does an exceptional job detailing the power on the ice, the friction of popular verses sidelined personalities, and how God develops love between those hurting, feeling lost, and abandoned. With this being part of a series, there is plenty of family characters for future romantic dynamics. Thanks to Tyndale House Publishers, Inc. for furnishing this book in exchange for a review based on the reader’s opinions.

It Had to Be You is an enjoyable hockey story. The characters are realistic, even if they have the stereotypical misunderstandings due to lack of clear communication. It was a wonderful read and I couldn't put it down. The characters faced issues and had doubts that are common to us all. The language is clean and the romance stays tame with a slight undertone of deep desire. An enjoyable read.

How do I forgive myself? It is much harder than forgiving others, or even accepting that God has forgiven us.  Many times as I was reading this book I had an AHA moment...where the words resonated with my heart. In this novel, Susan gets at some of the nitty gritty parts of the dynamics of a family life where there are siblings versus where there is an only child. Yes,and the way we can and do hurt the ones we love the most. I saw myself in more than just one of the characters, which i think is the talent of a good writer. As well as writing about characters that are undeniably realistic in situations we can find around us every day, the father, John is a very wise man, and his sayings resonate with the reader. I loved this book,and this series is a must keeper for me. It will go on the shelf together with Karen Kingsbury and Terri Blackstock. I received this Ebook free from Amy at Litfuse Publicity Group, Tyndale Publishing House and NetGalley in exchange for an honest review. A positive critique was not required. The opinions are my own.

As the second book in the Christiansen Family novel series, It Had to Be You follows Eden, the oldest daughter and second child of John and Ingrid Christiansen. Working in the obits department of the Minneapolis Star Tribune, Eden dreams of becoming a serious reporter. However, every spare moment of her life is taken up as chief cheerleader, family representative, nurse, and surrogate mother for her little brother, Owen, who makes it onto the NHL’s newest team, the St. Paul Blue Ox. When the spotlight and unexpected injuries damage Owen’s chances to succeed in the NHL, Eden comes face-to-face with Blue Ox captain, Jace Jacobsen. Together, they come to realize that God’s plan is not limited by their respective job titles. Like so many of Ms. Warren’s other books, It Had to Be You is challenging to summarize without giving away significant plot points. The novel offers a fascinating examination of how people come to define one’s purpose in life. While Eden aspires to be more than what other people define her, she comes to discover how God has put her in exactly the right place all along. Meanwhile, Jace realizes that he can be more than the hockey persona that his fans have come to expect. Throughout the book, other characters encounter situations that cause them to question God’s reasoning for tragedy, with some situations resulting in greater faith and relative resolution, while others surpass the timeline of the book itself. As a person who has faced similar questions in their life, I felt that these situations were very accurately portrayed and greatly enhanced the believability of the characters. Overall, I greatly enjoyed reading It Had to Be You and look forward to Ms. Warren’s forthcoming novels. Thanks! Brittany at BooksandBiscuits.com

http://booksandbiscuits.com/blog/2015/01/29/review-it-had-to-be-you-susan-may-warren/ Brittany at the Books and Biscuits Blog
Endorsements (1)

Why you should read it: I love that author Susan May Warren is writing each book of this series to stand alone, all while growing reader affection for the tightknit Minnesota family from which her characters come. This installment in the Christiansen family saga focuses on Twin Cities¬–relocated daughter Eden, whose presence and help are often taken for granted. She is the family caretaker, the nurturer, and she has no real grip on who she is outside of that identity. With an understated loveliness just waiting to be brought to the surface, Eden is the perfect mix of tough loyalty and personal vulnerability—and she needs help to figure out who she is and what she wants out of life, rather than only enabling the pursuit of dreams for those she loves. Enter, Jace.

Oh, Jace. *fans self* This guy is a professional hockey player with longish dark curls, a bit of beard, the physique of a Scottish warrior and a past that haunts him. He is a devoted friend, cooks a mean grilled cheese, and little children don’t even think twice before curling up in his lap to listen to him read stories — with sound effects! And did I mention he can sing along with Sinatra and Bublé? *fans self again* Jace Jacobsen is total book-boyfriend material . . . and may soon be taking up residence among my “favorite tortured heroes of all time.”

If you have not added this book to your shopping cart by now, check your pulse. It Had to be You is a sigh-worthy, coming-into-her-own romance highlighting the importance of family, the necessity of faith, and how losing yourself for the right reasons can open your heart to something beautiful.