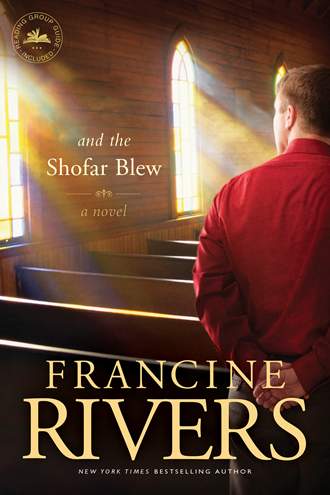 And the Shofar Blew

Francine Rivers Redeem For: 50 Points
You need to be a logged in member to redeem products.

A relevant and timely novel by the New York Times bestselling author of Redeeming Love and The Masterpiece.

When Paul Hudson accepted the call to pastor the struggling church, he had no idea what to expect. But it didn’t take long for Paul to turn Centerville Christian Church around. Attendance was up-way up. Everything was going so well. If only his wife could see it that way. Still, he tried not to let her quiet presence disturb him. She knew something wasn’t right, and it hadn’t been for a long time. . . .

Eunice closed the bedroom door quietly and knelt beside her bed.

“I’m drowning, God. I’ve never felt so alone. Who can I turn to but you, Lord? Where else does a pastor’s wife go for help when her marriage is failing and her life is out of control? Who can I trust with my anguish, Lord? Who but you?”

Grasping her pillow, she pressed it tightly to her mouth so that her sobs would not be heard.

“This book is a powerful and almost-prophetic statement of the church in America. . . . And the Shofar Blew is a must-read.”
—Anne Graham Lotz, bestselling author and speaker

“[Rivers] as usual turns in a strong narrative, posing issues that ring loud and clear.”
—Booklist

Also available in The Francine Rivers Contemporary Collection (e-book only).

I'm nearing the middle of the book now and things are getting TENSE! It's like listening in on a family conflict! I almost feel like an eavesdropper! In other words; AMAZING book! For some reason, the character of Samuel Mason reminded me of Tom Riley on Adventures in Odyssey. Tragically, he's been all but shut out, and his poor wife, Abby, at this point, must wonder if she's a costume designer to some Opera diva rather than a singing angel in a church production. And, in the midst of all this, the Pastor's long suffering wife is left wondering WHO her husband is 'building the church' for? Even the Lord took ONE day off!

I just finished this book yesterday. I did not want to put it down. I rejoiced and grieved with the characters. Francine Rivers truly has a gift for writing. She makes the characters seem like real people. She also quotes scripture and stays true to God's word. HIGHLY recommended.

A wonderful book. I could not put it down. Paul Hudson has good intentions as he starts his mega church and all seems to go well and he begins to slowly lose sight on the One and what really matters. A must read!

This book provides a very interesting and nuanced story about how a series of small decisions add up to huge consequences and how grace and forgiveness can move people out of their pits and into renewed places of growth. Really well done, a great read.

In old Jewish times, the shofar was sounded for people to assemble so they could confess and repent. In And the Shofar Blew, author Francine Rivers correlates the instrument of the Day of Atonement and Jubilee to one man coming to terms with his own sin of blind ambition. With over four hundred and forty pages, this softbound book has a photograph of sunlight streaming in church windows onto pews on the front cover. With no profanity and one inexplicit sexual scene, the story is targeted toward mature female adults, especially Christian women or pastors’ wives that could relate to the topic of personal, family and marital problems within church leadership. After the narrative that includes italicization for characters’ thoughts, included are an author biography, discussion questions and promotions of other written works. In this soul-searching tome, Eunice Hudson tries so hard to be an upright, loving, gracious and wonderful pastor’s wife and mother. When her husband Paul is called to replace an ill minister of a small, stagnant church, Eunice must gather all her strength, love and compassion moving from Illinois to Centerville, California to honor her husband’s wishes and demands. Praying for not only spiritual but church growth, Paul gets rapidly caught up in serving both man and himself instead of the Lord, leading to church rifts, broken friendships, and unfortunately, turning away from Biblical doctrine. Constantly competing and trying to get approval from his own father’s success pastoring a mega-church, Paul obsessively plans building expansions and projects to promote his own self-worth while ignoring and forgetting his wife and their young impressionable son, Tim. Friendships with the wise but dejected elder, Samuel, and his wife, Abby, along with Paul’s mother who has witnessed the same sorrow, shame and solitude in her own marriage, Eunice tries to focus on trusting in God for patience and humility through one crisis after another. When Paul’s perceivably perfect life spins out of control through focusing on church growth and his own needs instead of the spiritual condition of his family, position and the flock, Eunice and he are forced to see each other as they really are. Written with compassion about true everyday problems involving Christian ministry, the story brings to light the backdrop behind concentrating on ourselves instead of searching and relying on God to accomplish His church without walls. Although the shofar is not the focal point of the story, it is a reminder we are called by Christ to honor Him, not ourselves. This book was furnished by Tyndale for review purposes.